Yahoo's editors are committed to independently selecting wonderful products at great prices for you. We may receive a share from purchases made via links on this page. Pricing and availability are subject to change.
Kristine Solomon
15 September 2022, 4:48 pm·3-min read

Just like you, we’re always on the lookout for an exceptional pair of Bluetooth earbuds that won’t break the bank — and also won’t literally break after a few uses. One of the best audio brands on our radar is SoundPeats, and we just spotted an amazing sale on a pair of their most beloved true wireless earbuds. Right now you can save nearly 40% on SoundPeats True Wireless Earbuds. Originally $40, you’ll pay just $24 with this deal — just make sure to clip the on-page coupon. 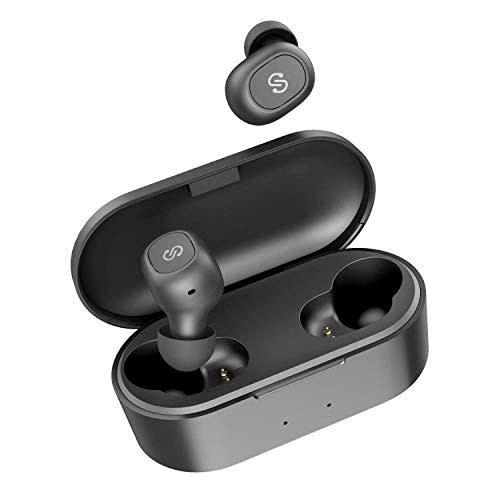 These true wireless earbuds use Bluetooth 5.0 for crisp sound for calls, music and podcasts. They also allow you access to on-ear controls to adjust volume, play and pause. A full charge is four hours, and 40 hours with the charging case. Clip the on-page coupon for the full discount.

If you’ve been heavily invested in Apple AirPods for a while, listen up: SoundPeats earbuds are a fierce competitor — and nearly 14,000 five-star Amazon reviewers agree. "These punch harder and higher than their price point suggests," writes one fan of these buds that use Bluetooth 5.0 and deliver such crisp Hi-Fi sound that you won’t believe your ears.

They employ a few sophisticated features that make this kind of performance possible, including a built-in high-resolution decoder and advanced audio coding technology. Basically, the same science you find in high-end earbuds but at an affordable price point.

You can also make and answer calls or use voice commands — and just like Apple AirPods, you can access on-ear controls to manipulate volume, play and pause or switch between music and phone calls. A full charge is four hours, but use the included charging case and you’ll get up to 10 times that.

"After searching for a pair of true wireless buds under $100 for weeks and running up against fake reviews and what seemed like junk products I want others to know—these are the real deal," writes one convinced customer. "The buds were charged out of the box so I opened my phone, paired them in under a minute and both worked flawlessly."

Like to keep one ear open at all times? The SoundPeats True Wireless Earbuds have you covered. "These have a particular feature I was seeking: The use of either left or right earbud by itself," one fan writes. "Without the need to have a ‘main’ earbud out of the case or...being able to use the right one only. I can now listen with either earbud, not carrying or using two sets (one charging while the other in use). Also, very simple to go from mono to stereo."

SoundPeats True Wireless Earbuds even look awesome — sleek black buds that "don’t stick out like some of the white ones you see people wearing," as one shopper adds.

Grab this pair at a deep discount and enjoy this true unicorn of the tech and audio world: A powerful, precise pair of earbuds with a price tag that won’t make your head spin.

These true wireless earbuds use Bluetooth 5.0 for crisp sound for calls, music and podcasts. They also allow you access to on-ear controls to adjust volume, play and pause. A full charge is four hours, and 40 hours with the charging case. Clip the on-page coupon for the full discount.