Yahoo's editors are committed to independently selecting wonderful products at great prices for you. We may receive a share from purchases made via links on this page. Pricing and availability are subject to change.
Libby Sentz
10 November 2022, 11:16 am·6-min read

For me, the colder months have always meant a fresh start for my fitness regimen — a time to launch new habits, commit to new goals and turn over a new leaf. That's why I'm excited to tell you that the Fitbits that changed the fitness lives of my family are on sale at up to 40% off. Speaking of fitness: This deal's a great chance to get a jump on Black Friday deals. 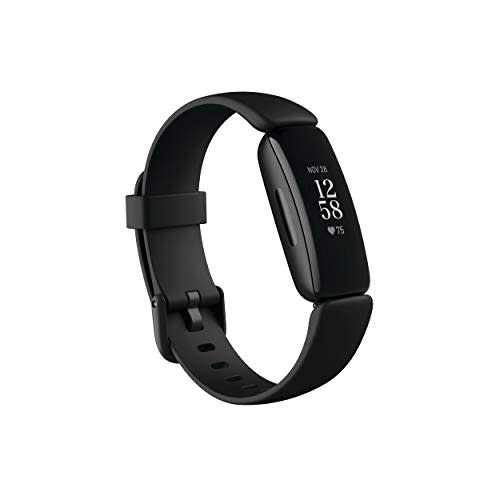 $56$100Save $44
Not a fan of fitness trackers? This minimalist-but-mighty band just might make you a convert.
$56 at Amazon

Before I go on, let me get humble. I never imagined myself a Fitbit person. But after the success I've seen with these devices, I officially take back everything I previously thought about fitness trackers. I'd assumed they were reserved for overly obsessed exercise nuts. No shame in that, but I did not want that kind of pressure from a judgy watch. Then I had a change of heart. Literally.

A health concern rocked me and made me want to keep tabs on my heart rate. Also, I'd been waking up so much in the night, I feared I was missing out on deep sleep altogether. I asked a group of folks with similar issues about their fitness trackers. They overwhelmingly recommended Fitbit over the pricier Apple and Garmin models. Specifically, they directed me to the No. 1 bestseller Fitbit Inspire 2. (Lucky for you, it's on sale right now for $56!)

Around the same time, my 7-year-old was asking for a watch. She loved her friend's fitness tracker, excited by the cute animations activated when fitness goals are met. Disco balls! Fireworks! Hmm... I thought, she needs motivation for those mile-long treks to and from school.

So I snapped up an Inspire 2 and invited my daughter to pick out her fave Fitbit Ace 2 (not on sale, but a great price ). She chose the purple one, of course.

When our watches arrived the next day (speedy delivery is a perk of being an Amazon Prime member, don't you know?), we were stoked. Setup was easy and fun. The more we high-fived over accomplishments (like racking up lots of steps), the more envious my husband became. He was experiencing full-on FOMO! We began taunting him mercilessly with our cool stats and Fitbit lingo. It was awesome.

My husband and I were about to celebrate our 15th wedding anniversary, and I learned somewhere that the "modern" gift for that milestone is a watch. It seemed like a sign. I picked out the Fitbit smartwatch model best suited to tech-savvy people: the Versa 2. It miraculously arrived the same day! (Kudos, Prime!) He was over the moon.

Now we are all moving more and sleeping better. Sure there are other ways to motivate toward health goals, but for our family, the Fitbit has been a game changer. We love that these babies are swim-proof, too, and the fact that our daughter is part-mermaid. We can even send each other challenges, to keep things interesting. Truly, fun for the whole family.

$56$100Save $44
Not a fan of fitness trackers? This minimal-but-mighty band just might make you a convert.
$56 at Amazon

My slim Fitbit Inspire 2 looks and feels great. I am obsessed with the sleep tracker! It gently reminds me to start thinking about sleep at 10 pm. (yeah, right). In the morning, it tells me the quality of my slumber — how much time I've spent in light, deep and REM sleep and provides a very helpful "Sleep Score." This has led me to improve my slumber hygiene (yes, that's a thing!), making me a happier human.

The Inspire 2 also opened my eyes to how little I was moving on heavy workdays. The nudge was needed. I haven't yet explored the 20 fitness modes, and I know I won't use the calorie counter or water consumption features. But I do love seeing how many miles I've walked. It especially delights me when a celebration pops up as I'm carrying a bowl of ice cream to the couch.

This is all more than I could ever need, but if you're a real fitness buff (or wish to be), you'll be excited by the free yearlong Premium trial, which unlocks so many more features — loads of workouts and detailed personalized sleep and nutrition plans. If the user continues Premium service after a year, the app will begin charging $10 a month.

Another cool feature: The watch receives text and call notifications. With the screen being so narrow, it can be tough to read the display, but controls can be accessed on the app. Another win: The watch only needs to be charged once every 10 days.

Another impressive stat? The Inspire 2 has received over 50,000 five-star reviews from Amazon shoppers.

"It's functioning flawlessly," said one fan. "It was a great price, is very easy to use, and really is a good little motivator. I love the gentle alarms, the relax exercises, and the little reminders to drink water and exercise. Sleep tracking is really fascinating and a personal goal of mine to work on; this is a major help to me in that regard. I love that it is swim-safe as well, since I'm big on swimming.... It is a small piece of plastic that I find quite incredible at what it is capable of doing for being so tiny, and am amazed at all of the extras!"

My husband and his Fitbit Versa 2: 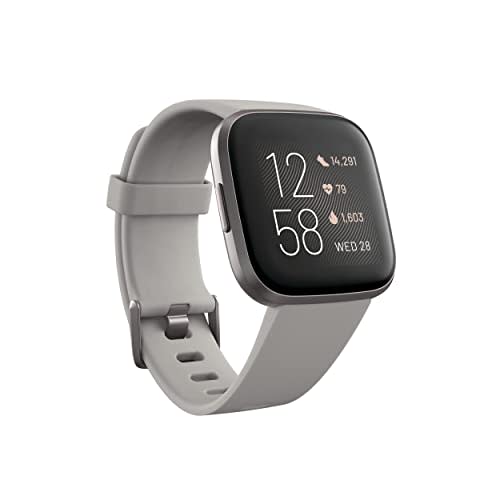 A solid, modern smartwatch, the Fitbit Versa 2, is awesome for tech-minded folks, like my husband. It features fitness tracking, music streaming and on-board music storage, contactless payments, voice-activated support (hi, Alexa!) and so much more.

His earbuds connect directly to his watch, which allows him to listen to Spotify music and podcasts phone-free. He's pretty blown away by how much mileage he gets while running around doing tech support at work. The watch even measures blood oxygen saturation! The calm breathing exercises serve him well too.

The latest version, Fitbit Versa 3, has a longer battery life and perhaps a neater interface, but I didn't see a really good reason to pay another $58 for that. The 2 is great!

Amazon customers have given Fitbit Versa 2 more than115,000 five-star ratings (whoa!), and it's clear from their comments that they are loving it.

"I'm addicted!" wrote one fan. "I couldn't decide between Fitbit and an Apple Watch, so I ended up getting both to see which one I liked better. Fitbit took the cake on this one."

Another Versa 2 lover said: "This is awesome. I love the accuracy of the sleep tracker, step counter, and heart rate monitor! As a former Charge 2 user, this thing is loaded with extra 'bells and whistles,' like Alexa built-in (SUPER CONVENIENT), ability to control Spotify/Pandora, cuts out the 'middle man' (i.e, your phone) when it comes to tracking water intake, female calendar, as you can log all this info right from your wrist."